The atrocities of croatian fascists-ustase during WW2

NO SERBS, JEWS, NOMADS ['Gypsies'] AND DOGS" - Text of signs on public establishments in secessionist Croatia in June, 1941. 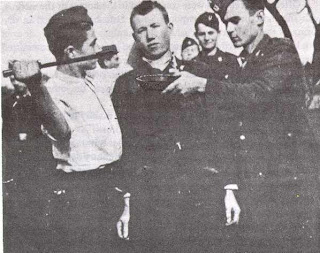 Ustashi ready to collect blood of a victim

The Ustasha army („Ustaška vojnica“) was organized by Slavko Kvaternik, the „second in command“ and it was made up of Ustasha units (filled out with volunteers) under the direction of the Central Ustasha Headquarters, of special police units („redarstvo“) and the Home Guard („domobrani“), and in August of 1941 the Ustasha Secret Service (abbreviated UNS after the Serbo-Croatian („Ustaška Nadzorna Sluzhba“) was formed, with Eugen - Dido Kvaternik at its head. With the aid of these organizations, the greatest kind of genocide was carried out against the Serbs, Jews and Romanies in the NDH. In order to make it possible for only Croats and Muslims to live in the NDH, the mass physical destruction, expulsion and forcible conversion of the Serbs was carried out, along with the systematic extermination of the Jews, and the almost complete destruction of the Romanies. The mass murder of the Serbs began already at the end of April, 1941, with the massacres in the villages around Bjelovar, in Banija in May, in Lika in June, in Kordun, in Bosnian Krajina and in Herzegovina. It is thought that just in the period from April, 1941, to the middle of August, 1942, over 600,000 Serbs were killed in the most brutal ways imaginable, and during the entire war over 180,000 Serbs were deported to Serbia proper.

The terror of the NDH government was especially aimed at the Serbian Orthodox Church. Three Orthodox bishops and most of the Orthodox priests were murdered by the end of 1941 in the cruelest of manners. During the war, 450 Orthodox churches were demolished. The exact number of Serbs forcibly converted to Catholicism has never been established.

"Converting" the Orthodox Serbs, December 21st, 1941, Friars, besides Priests, participated in forcible conversions. They were no less ruthless than the parish clergy, e.g. Monk Ambrozije Novak, Guardian of the Capucine Monastery in Varazdin, who, after surrounding the village of Mosanica with Ustashi contingents, told the people: "You Serbs are condemned to death, and you can only escape that sentence by accepting Catholicism."

Catholic Padres did not hesitate to liquidate those who resisted. Witness Father Dr. Dragutin Kamber, a Jesuit priest and sworn Ustashi, who ordered the killing of 300 Orthodox Serbs in Doboj... Or Father Dr. Branimir Zupanic, who had more than 400 people killed in one village alone: Ragoje. Father Srecko Peric, of the Gorica Monastery, near Livno [Herzegovina], advocated mass murders with the wollowing words: "Kill all Serbs. And when you finish come here, to Church, and I will confess you and free you from sin." This resulted in a massacre, on August 10th, 1941, during which over 5,600 Orthodox Serbs in the district of Livno alone lost their lives.

A mass execution carried out by the Ustashi at Brode [near Vukovar], early in 1941. 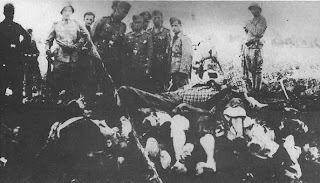 Nazi troops were looking at some of the victims.

The Nazis, who for a time were posted in Croatia, were so horrified at the Ustashi atrocities that they set up special commission to investigate them. The Orthodox Church of Serbia, in fact, appealed directly to the Nazi General Dukelman to intervene and stop the Ustashi horrors.

The Germans and the Italians managed to restrain the Ustashi while they were under their supervision. When the Nazis left Croatia, however, the Ustashi multiplied their atrocities, unrepremanded by the Government. Since the later's policy was one of the total elimination of the Orthodox Serbian population via forcible conversions, expulsion, or straightforward massacre.

Victims were executed in groups without trial on bridges and then thrown into the river. In May 1941 the Ustashi beseiged Glina. Having gathered together all the Orthodox males of over fifteen years of age from Karlovac, Sisak and Petrinja, they drove them outside the town and killed 600 of them with guns, knives and sledge hammers. 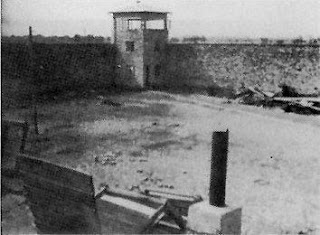 Jasenovach was the largest concentration and extermination camp in CROATIA. It was in fact a complex of several subcamps, in close proximity to each other, on the bank of the Sava River, about 62 miles (100 km) south of Zagreb. The women’ s camp of Stara Gradiška, which was farther away, also belonged to this complex.
It was established in August 1941 and was dismantled only in April 1945. The creation of the camp and its management and supervision were entrusted to Department III of the Croatian Security Police (Ustaška Narodna Služba: UNS), headed by Vjekoslav (Maks) Luburić, who was personally responsible for everything that happened. Some six hundred thousand people were murdered at Jasenovac, mostly Serbs, Jews, Gypsies, and opponents of the USTASA regime. The number of Jewish victims was between twenty thousand and twenty-five thousand, most of whom were murdered there up to August 1942, when deportation of the Croatian Jews to Auschwitz for extermination began. Jews were sent to Jasenovac from all parts of Croatia (and Bosnia and Herzegovina, e. n.) from Zagreb, from Sarajevo, and from other cities and smaller towns. On their arrival most were killed at execution sites near the camp: Granik, Gradina, and other places. Those kept alive were mostly skilled at needed professions and trades (doctors, pharmacists, electricians, shoemakers, goldsmiths, and so on) and were employed in services and workshops at Jasenovac. The living conditions in the camp were extremely severe: a meager diet, deplorable accommodations, a particularly cruel regime, and unbelievably cruel behavior by the Ustaše guards. The conditions improved only for short periods during visits by delegations, such as the press delegation that visited in February 1942 and a Red Cross delegation in June 1944.

METHODS AND MEANS OF THE MASS EXTERMINATION OF PEOPLE IN JASENOVAC

From the summer of 1941 to the spring of 1945, death in Jasenovac took numerous forms. The prisoners and all those who ended up in Jasenovac had their throats cut by the Ustasha with specially designed knives, or they were killed with axes, mallets and hammers; they were also shot, or they were hung from trees or light poles. Some were burned alive in hot furnaces, boiled in cauldrons, or drowned in the River Sava.

Here the most varied forms of torture were used: finger and toe nails were pulled out with metal instruments, eyes were dug out with specially constructed hooks, people were blinded by having needles stuck in their eyes, flesh was cut and then salted. People were also flayed, had their noses, ears and tongues cut off with wire cutters, and had awls stuck in their hearts. Daughters were raped in front of their mothers, sons were tortured in front of their fathers. Said plainly, in the concentration camps at Jasenovac and Stara Gradiška, the Ustasha surpassed all that even the sickest mind could imagine and do in terms of the brutal way people were murdered.

People in Jasenovac were no longer human beings, but rather objects which were available for the every whim of the Ustasha.

Even the Nazi generals were amazed at the horrors of Jasenovac. Thus, General von Horstenau, Hitler's representative in Zagreb, wrote in his personal diary for 1942 that the Ustasha camps in the NDH were „the epitome of horror“, and Arthur Hefner, a German transport officer for work forces in the Reich, wrote on November 11, 1942 of Jasenovac: „The concept of the Jasenovac camp should actually be understood as several camps which are several kilometers apart, grouped around Jasenovac. Regardless of the propaganda, this is one of the most horrible of camps, which can only be compared to Dante's Inferno“.

THE BREAKOUT OF THE PRISONERS AND THE LIBERATION OF THE CAMP

At the beginning of April 1945, the Ustasha were preparing the liquidation of the Jasenovac camp in order to remove the traces of their crimes before escaping. The ultimate liquidation of the Camp was begun on April 20, when the last large group of women and children was executed. On April 22, 1945, under the leadership of Ante Vukotić, about 600 people armed with bricks, poles, hammers and other things, broke down the doors, shattered windows and ran out of the building. About 470 people were sick and unable to fight barehanded with the armed Ustasha, so they did not take part in the rebellion. The 150 meter long path to the east gate of the camp was covered by the crossfire of the Ustasha machine-guns, and many prisoners were killed there. A large number of them was killed on the wires of the camp. A hundred prisoners managed to break through the broken gate of the camp. Only 80 prisoners survived while 520 of them died in the first assault. The remaining 470 within the camp were later killed by the Ustasha.

The captives, 167 of them, from the so-called „Kožara“ part of the Jasenovac camp, about 8 p.m. on April 22 also began mortal combat under the leadership of Stanko Gaćeša and Zahid Bukurević. 150 of them managed to break through, but they were surrounded and fired at so heavily that only 11 prisoners survived.

The Jasenovac camp was not liquidated until the very last battles were being fought. The Yugoslav Army forces entered the Stara Gradiška camp on April 23, and Jasenovac on May 2, 1945. Before leaving the camp, the Ustasha killed the remaining prisoners, blasted and destroyed the buildings, guard-houses, torture rooms, the „Picili Furnace“ and the other structures. Upon entering the camp, the liberators found only ruins, soot, smoke, and dead bodies.

Ярлыки: The atrocities of croatian fascists-ustase during WW2

From America, with Love:

Crossposted to my blog:
Paolosilv.wordpress.com

Thanks for sharing the best and informative article.
Buy Cannabinoids Products in USA