Datsan (Russian: Дацан) is the term used for Buddhist university monasteries in the Tibetan tradition of Gelukpa located throughout Russia, but concentrated in Eastern Siberia. As a rule, in a datsan there are two departments - philosophical and medical. Sometimes to them is added the department of the tantric practices where the monks studied only after the finishing education of the philosophical department. In pre-20th century Russia, datsans traditionally existed only in Buryatia and Transbaikalia.

Datsans were officially acknowledged in the Imperial Russia in 1734. By statute of 1853 were recognized 34 datsans: two in the Irkutsk governorate and others in the Zabaykalsky governorate. The first datsan in Europe was Gunzechoyney datsan. It was built in St Petersburg between 1903 and 1913 and started to operate on 21 February 1913.

Between 1927 and 1938 all 47 datsans, existed in Buryatia and Transbaikalia were closed or destroyed. In 1938-1945 no one datsan not worked. In 1945 was opened Ivolginsky datsan, several years later resumed his work Aginsky datsan.Only in 1991
were opened next 10 datsans. 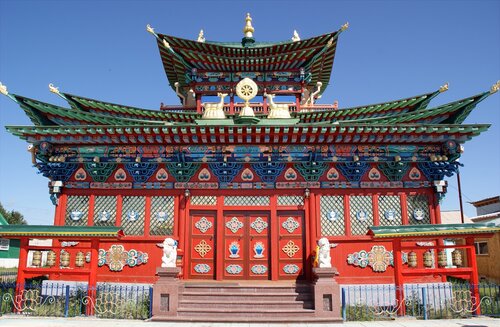 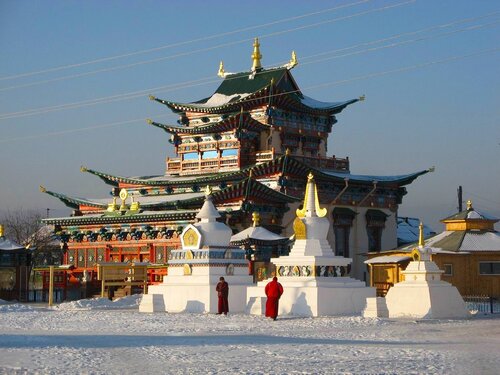 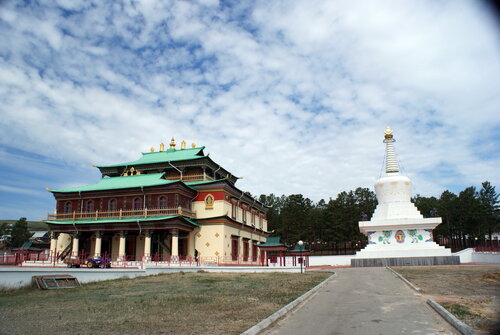 The Bear In Russian Culture

The Bear — a significant factor of Russian culture - appears in many Russian literary works, folk tales, epics, proverbs and sayings, not infrequently acting as a protagonist. The Bear was the emblem of the XXII Olympic Games held in Moscow in 1980. 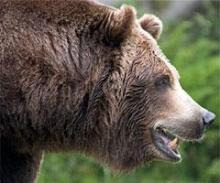 It is needless to say that in Europe, America, and probably all over the world the bear is strongly associated with Russia and the Russian statehood. Therefore the bear in Russia is more than just a bear. Initially the bear as the symbol of Russian state appeared in Europe as personification of slowness, laziness, barbarity and aggression, which evokes in Europeans the feeling of their own superiority to the non-civilized "neighbour" and also the feeling of fear and, consequently, the desire to chain it. Certainly, Russia repeatedly gave its neighbours some grounds for fear, however, if Russian bear did not exist, one should have made it up. The thing is that the bear is the image helping politicians of the West to convince the citizens of Russia’s aggression and thus expand the influence of NATO on the east. For more than 300 years already the bear has invariably been a character of political feuilletons and caricatures. 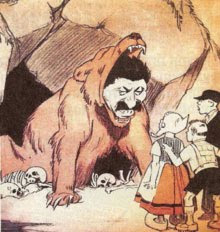 In Russian culture the bear traditionally appears as the image of a good-natured and a somewhat dumb animal, undoubtedly possessing certain charisma. In folklore the Bear is usually named affectionately and respectfully as a man: Mishka, Mihailo Potapych, Toptygin, etc. So it is evident that the Bear is more likely a kind neigbour, or a guard, never a tyrant. Emblems of Russian cities say about the same thing. 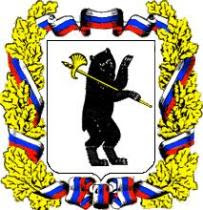 Among the land emblems of Russia before Peter the First, there were three emblems with the images of bears. Two emblem bears appeared during the rule of Ivan the Terrible and were present at the stamps of his reign - first of all the well-known Big State Stamp made at the late 1570th (not later than in August 1578), during the Livonian war. However, all the three emblems with bears took their final shape only in 1672, when they were enlisted in the Title Book among other land emblems.

Bears there are not simply represented in their natural state: every one of them has its special attributes, which make researchers look for suitable interpretations. It is interesting that all the three bears are interfaced to concrete territories of the north and northeast of Russia, and those that were once perceived as marginal and somewhat peripheral lands, such as Novgorod, Yaroslavl and even farther Perm.

The Novgorod bear had the state and political meaning of the guard, whereas Yaroslavl and Perm bears reflected essential cultural models. The first one stands for the single combat and the victory over the bear of the prince, also interpreted as the victory of Christianity over paganism, and the second one symbolizes Christianization in its religious and educational aspect. If the Yaroslavl emblem has an element of violence, the "quieter" Perm emblem conveys rather peaceful introduction into the new belief.

In XVIII-XIX centuries some more bears appeared in the Russian territorial and city heraldry. Partly they originated from Yaroslavl (the arms of Maloyaroslavets), and partly boasted more original appearance: a bear in its den in the emblem of Ust-Sysolsk, or a bear climbing a pine to get honey in the emblem of Sosnitsy – those depicted local natural peculiarities of the land.

The Russian bear was and remains a part of everyday life, and even gaining weight in recent years. It is sufficient to have a look at the titles of articles recently published in world press ('Russian bear comes back', 'Awakening of Russian bear', and ‘Russian bear plays muscles') to realize the meaning of this symbol in politics and culture. The bear became an emblem of the political movement 'Edinstvo' (Unity), and following that of the party 'Edinaya Rossia’ (United Russia). Now, when the President of Russia has the 'the bear’s surname’ the symbol has gained refreshed popularity.

Ярлыки: The Bear In Russian Culture

The Moscow Kremlin is the site of several world-famous museums attracting numerous visitors. One of them is the Diamond Fund exhibition, a unique collection of precious stones and masterpieces of jewelers’ art. It was founded by Tsar Peter the Great as the storage of state insignia and ceremonial jewelry of the Tsar’s family. Tsar Peter’s decree of 1719 declared them Russian national treasures. Peter the Great also founded the Diamond Mill in Peterhof, a St.Petersburg suburb, to polish precious stones.

The development of the Russian mining industry in the Urals in the 18th century was accompanied by a growing interest in Russian gems. Diamonds and other precious stones were mounted in the coronation regalia, that is, crowns, scepters, and orbs. They adorned The Big Imperial CrownRussian state awards and valuable weapons.

When preparing for coronation in 1762, Catherine the Great ordered a Big Imperial Crown. The gold-and-silver crown made by a court jeweler Jeremiah Posier is decorated with almost five thousand diamonds – large and small – and 75 perfectly round, even-shaped large pearls. Posier achieved a harmonious combination of magnificent diamonds and white-pink pearls enhancing the stateliness and majesty of the crown’s design. A huge ruby-red spinel crowned with a diamond cross was placed on its top. The Russian Imperial Crown, weighing almost 400 carats – the most expensive in the world — is one of the seven historic gems of the Diamond Fund exhibition. 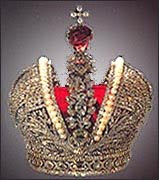 On display in the Diamond Fund is the world-famous Orlov diamond, the best known in Russia in the 18th century. This bluish-greenish crystal of the first-class clarity is cut in the shape of a rose with a great number of small facets arranged in layers. The Orlov diamond is believed to have been found in India where, according to a legend, it had served as the eye of an idol in a Brahman temple until the beginning of the 18th century, when it was stolen. In 1774, it was bought by Count Grigory Orlov who presented it to Empress Catherine the Great. Since that time the Orlov diamond has adorned the gold scepter of Russian Emperors.

Another historic gem of the Diamond Fund exhibition is the Shah, another Indian diamond found in the 16th century. Its perfect shape was created by nature, and only some of its facets were slightly polished. This is a transparent gem with a slight yellow tint. Engraved on three of its facets are the names of the three rulers who, in turn, possessed it. In the 17th century, the diamond adorned the throne of the TiaraMughal Empire as a talisman. When Shah Nadir conquered Delhi in 1739, he took the stone away with him to Persia. Ninety years later, the diamond was presented to Russian Emperor Nicholas I by the Shah of Persia “in atonement” for the assassination of Russian Ambassador in Tehran, a noted diplomat and poet Alexander Griboyedov.

In 1922, the Diamond Fund was set apart from the state repository later to become a separate exposition. The Kremlin’s Diamond Fund exhibition was opened to the public in 1967 to mark the 50th anniversary of the Soviet state. Initially, the collection was to be on display for a year. However, considering immense interest in it and a vast number of visitors, it was decided to make the exhibition permanent.

Today the Diamond Fund exposition is housed on the ground floor of the Kremlin’s Armory Chamber. On display in the first of its two halls are Russian diamonds, a rare collection of gold and platinum nuggets, and also Russian-made jewelry. The largest diamonds found in this country include some remarkable specimens named after notable events or personalities, such as the Star of Yakutia, the Great Beginning, and the Yuri Gagarin diamonds.

The Camel gold nuggetA large showcase demonstrates a collection of platinum and gold nuggets of rare weight, quality and shape, among them the Big Triangle nugget, the largest in the world, weighing over 36 kilos, and some fantastically-shaped ones, like, for example, “Hare’s Ears”, “Horse’s Head”, and “Camel”. On display at the Diamond Fund are also famous Russian semi-precious stones – a rare and very colorful collection of magnificent emeralds, sapphires, amethysts, and topazes.

The earliest jewelry on display dates back to the middle of the 18th century and includes exquisite posy-pins, flower-shaped ear-rings, and a diadem fashioned as a garland. The Diamond Fund also displays pre-revolutionary Russian and foreign orders, the most famous being the Order of St.Andrew the First Called richly adorned with diamonds. 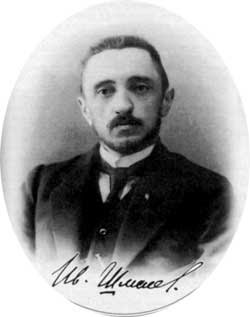 My Love (Russian: Моя любовь, Moya lyubov) is a 2006 paint-on-glass-animated short film directed by Aleksandr Petrov, based on A Love Story (1927) by Ivan Shmelyov. Work on the film took place in Yaroslavl, Russia over a period of three years at the studio DAGO Co. It was funded by Russia's Channel One and Dentsu Tec in Japan.