900 Days In Hell:The Church shared the burden of life under siege with its people

At the beginning of the Great Patriotic War, foreign policy circumstances made it necessary for Soviet authorities to abandon their plan to totally destroy the Russian Orthodox Church in the country. Looming war forced government bodies to re-evaluate the role of the Church within the country and in the international arena. However, its position remained tragic, many prohibitions complicated its activity, hundreds of priests languished in prisons and labor camps. Towards the end of the 1930s, only 4 ruling bishops remained at liberty in the Soviet Union. By 1941 in one of the country's largest dioceses, Leningrad, only 21 Orthodox temples survived; monasteries and educational institutions were closed; there was no church press. Severe burdens of war and a city under siege increased these difficulties.

During this period, the Leningrad diocese was headed by the well-known churchman, Metropolitan Alexiy (Simansky), later Patriarch of Moscow and All Russia. In the encircled city and its northern suburbs, there remained under his rule the St. Nicholas Episcopal Cathedral and the St. Prince-Vladimir Cathedral and the following churches: St. Nicholas - Bolsheokhotinskaya, St. Job cemetery - Volkovskaya, St. Demetrius - Kolomyazhskaya, and the Savior - Pargolovskaya.

The Savior/Transfiguration Cathedral, St. Seraphim Cemetery and the churches in the Lisy Nos settlement, administered by Protopresbyter Alexiy Abakumov, belonged to the renovationist movement. Moreover, one working Josephite temple remained in the city - Holy Trinity in Lesny, served by hieromonk Pavel (Ligor). The total number of Orthodox clerics in the city did not exceed 25.

The Church calls for the defense of the Homeland

Since the first days of the war, the Russian Orthodox Church was devoted to the defense of the homeland. Already on June 22, 1942, the Patriarchal Locum Tenens, Metropolitan Sergiy (Stragorodskiy), addressed a message to the faithful. It was read in Leningrad's temples, and people departed for the front as for an ascetic feat [podvig] with the Church's blessing. On June 26, the head of the diocese, Metropolitan Alexiy, wrote his appeal to the clergy and faithful "The Church calls for the defense of the Homeland". His sermon given on August 10 gained special renown. It referred, first of all, to a Russian's patriotism and devoutness. At this time the Leningrad Metropolitan's authority and influence were so great that on October 12, 1941, the Patriarchal Locum Tenens, in his will, appointed him his to be successor.

At Metropolitan Alexiy's suggestion, Leningrad's parishes started collecting donations for the city's defense. The Metropolitan supported the believers' desire to donate existing parish savings to this cause, at times these were very significant savings. The parish council of St. Prince-Vladimir Cathedral offered to open, at their expense, an infirmary for wounded men and sick soldiers, and on August 8 transferred 710 thousand of the 714 thousand rubles belonging to the parish community.

However, concrete charitable activity was forbidden even after the war began. Parishes were allowed to transfer money only to public funds: the Red Cross, defense, and others. This restriction did not dampen the enthusiasm of either the faithful or the clergy. Parishes refused to make all but the most necessary expenditures. Warm articles for soldiers were collected everywhere; the faithful donated food for the sick. During the first days of the war, St. Nicholas Cathedral allocated 385 thousand rubles, and by the end of 1941 all of Leningrad's parishes gave a total sum of 2 million 144 thousand rubles. 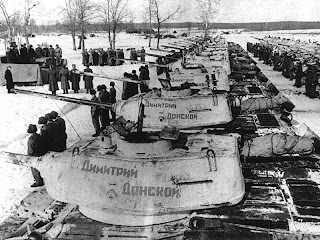