Household Furnishing and Utensils of the Old Russians 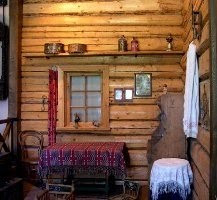 Interior furniture in houses of the nobility and rich merchants was naturally quite different from plain furnishing in humble huts of peasants and craftsmen.

The floor in rooms was usually covered with bast matting or felt, whereas in rich houses carpets were used. Along the walls there stood immovable benches upholstered with woven bast matting or cloth; in well-off houses cloth or silk covers hanging down to the floor were laid over benches. Room furniture was supplemented with special benches up to 1.5 meters broad, with headrests to provide comfortable rest after dinner. Quadrangular stools were used for sitting as well.

In front of the benches there stood long and narrow tables, most often made of oak and decorated with carving. In rich houses one could also see small tables adorned with colourful gems. It was a custom to cover the tables with under-cloths, over which woolen or velvet tablecloths embroidered in gold and silver were laid. Common folks used only coarse linen tablecloths or could also do without them.

Icons hanged on walls made an integral part of any room. The edges of an icon were often framed with a silver or golden setting, and the icon was placed into an icon case. The most common icon material was wood; sometimes stone or white bone could be applied, though. There were also metal hinged folding icons that had images on both the inner and outer sides. Icons with lampions and wax candles before them were put in the front corner of a room and could be drawn with a curtain. In rich houses they could have a special “cross” room, all filled with icons, for home praying.

Wall mirrors were a great rarity even in rich mansions, whereas small mirrors imported from the overseas were quite widely spread. As for wall-mounted paintings they became available in Moscow only by the end of the 17th century.

Our ancestors had no beds as such, but slept on benches; a broad bench was drawn up to a wall-fixed bench forming a sleeping place. In rich houses the benches were covered with featherbeds, pillows in trimmed pillowcases, linen or silk bed sheets and satin blankets lined with expensive fur. However, the richly trimmed beds were only in houses of the nobles and the rich. Most of the population used thick felt as bedcover, or, else, they slept on stoves, plank beds, or wooden benches, covered with fur coats or some other clothes. 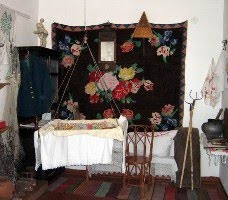 Household things were kept in trunks and in chests, which often had drawers. Women’s decorations were preserved in artistically decorated caskets and were inherited as family jewels. Pocket watches were quite a rarity, though clocks were often imported from abroad. It is known that Tsar Mikhail Fyodorovich was a big clock-fancier and collector. According to descriptions of foreigners, in the house of Boyar Artamon Sergeyevich Matveyev one of the chambers had the floor covered with square floor planks, a big glazed stove, and a chandelier hanging from the ceiling; parrots and other beautiful birds were sitting in cages hanging here and there; along with paintings on the walls, a large mirror and a decorated table there were clocks of various arrangement: on one of them the hands showed the time from noon, i.e. the astronomical day, whereas the other one marked time from sunset, the third one – from sunrise, and the fourth one – from midnight, as it was traditional in the Latin church. However, more common in household were the so-called “striking clocks”, with the dial turning instead of the clock hands.

For illumination they used wax candles or, in poor houses, tallow candles; or, else, they applied birch or fire tree splinters. Candles were inserted into wall candlesticks or standing ones, small in size, which could be shifted in case of necessity. When going to the stable or the barn in the evening they used a mica lantern.

Household provisions were kept in barrels, tubs and bast baskets that stood in closets. Kitchen utensils were scarce and primitive; frying was done in tinned iron and copper pans, and dough was kneaded in wooden vats and tubs.

The washstands were made of copper, tin or even silver. In case of cooking food for a big number of people, copper or iron cauldrons were used. Beer and wine cauldrons had the capacity of up to 50 buckets. 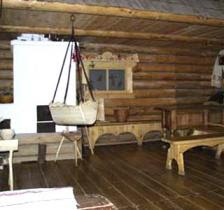 Wooden, tin or silver basins served as foodware for liquid food, and wooden, clay, tin, tinned copper or silver platters served for roasts. They seldom used plates and less frequently washed them; instead of plates they usually applied flat cakes or hunks of bread. Still less often knives and forks were used; at that time the latter were two-pronged. Having no table napkins when sitting at table they wiped hands with towels or the edge of the tablecloth. Vessels for serving drinks were quite varied: flagons, buckets, quarters, loving cups, etc. The frequently used flagons had the capacity of one or several buckets. The quarter had the shape of a soup bowl and in full equaled a quarter of a bucket, but actually it could be of different size. The loving cup intended for treating relatives and friends at feasts was a glove-shaped vessel, often with a low tray and a conical cover; wine was scooped out of it with ladles.

The vessels from which hosts and guests drank were also of various types: cups, bowls, goblets, ladles, and rouses. The cups usually had a cylindrical form, somewhat narrowing upwards, yet there were also four-sided and eight-sided cups. A full-measure cup had the capacity of one eighth of a bucket. The bowls were broad round vessels with handles or brackets. The goblets were round vessels with a lid and on a tray. The ladles had an oblong bottom. Small-sized rouses were round and flat-bottomed, and sometimes had a stem and a lid. Besides, following an old custom, silver-framed horns were used for wine drinking.

In houses of noble and rich people precious silver and gilded vessels were put as a decoration on a stand placed in the middle of the showroom. These vessels usually bore inscriptions containing some dicta or dedications to the one who the vessel was presented to.

Ярлыки: Household Furnishing and Utensils of the Old Russians