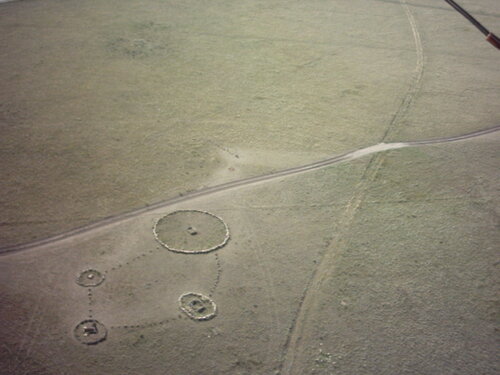 Sometimes referred to as the Russian Stonehenge, the ancient town of Arkaim is one of the most mysterious places on our planet. It is situated on the outskirts of the city of Chelyabinsk, a large industrial center in the Urals. Arkaim was discovered quite by chance in the summer of 1987. Scientists believe it is at least 4,000 years old. It is older than the legendary Troy and the Egyptian Pyramids and is close to being the same age as Stonehenge.

According to one theory, Arkaim was built by the Aryans, representatives of one of the most ancient Indo-European civilizations, and the forefathers of many Europeans.

Arkaim is a settlement within a fortress, some 20 square kilometers in size, which has a distinctly circular shape. On the outside there is an external ring of a massive fortified wall up to four meters thick and six meters tall and a deep moat filled with water.

Within the external wall there is another ring of a smaller diameter but fortified equally well. In the space between the walls were residential quarters and shops. Artifacts found there indicate the wide use of copper smelting furnaces. Why copper is still unclear. Today there are no traces of the raw material for copper in the vicinity, which means that it either was there at the time or it was brought there from afar. But why they needed copper is still a mystery. Many experts believe that it was in Arkaim that the first copper smelting furnace in the world was built. It was there too that the horse was first domesticated and the two-wheeled chariot was invented.

The residential area of the fortress boasted advanced amenities considering the time it was built in. The pavement made of thick logs hid a sewage system. Two round one-storey houses positioned along the perimeter between the two fortified walls comprised separate apartments, a hundred or more square meters each. In addition to several rooms, each apartment had a hearth and a well. In the very center of the city-fortress was a square where religious rites were performed.

Why did Arkaim have a circular layout which was so unusual for a city of the time? Such a shape is considered very convenient during military defense operations — no corners, therefore the enemy is clearly seen from all sides. According to another theory, a circle resembles the shape of the sun, and the people living there worshipped the Sun god.

Yet another hypothesis has it that certain installations found by archeologists indicate that they were intended to be used for star watching. Some scientists believe that the entire city was nothing other than a huge well-equipped ancient observatory. Therein lies the similarity between Arkaim and Stonehenge.

It's interesting that both places are not just of roughly the same age, they are also located at the same latitude. Both were designed to be precisely oriented on stars. Both were constructed in very similar locales — valley at the foothill. Are these mere coincidences, or is there a link between the two? The question remains unanswered as yet.

Unlike Stonehenge that is relatively well-preserved, not much is left of Arkaim — mostly defense moats, earth banks and building foundations. Archeological excavations that have been going on for 20 odd years indicate that the city was destroyed well-nigh entirely by a massive fire. Fascinating finds like ceramic utensils, work implements, smelting furnaces and other artifacts make it possible to visualize what the city was like 4,000 years ago. Oddly enough, among the archeological finds there are no human remains or bones of domestic animals. No valuables, no jewellery, no religious objects. Could it be that they have disintegrated over the millennia gone by? But why then have similar items survived in ancient burial places outside the fortress walls? Why has time spared them?

Two hypotheses address the issue. According to one of them, the residents of Arkaim knew for certain that the city would be destroyed shortly by a calamitous event and evacuated everybody including domestic animals ahead of time. The other hypothesis suggests that having abandoned the city, the residents themselves set it on fire. When and why they did it is yet another mystery.

Arkaim doesn't cease to excite interest and attention. Not only among scientists and experts. Tourists from Russia and abroad have been visiting there in droves every year. There are no hotels in Arkaim, so those wishing to spend the night on this enigmatic soil have to do so in tents. In summer time most visitors prefer to spend the night under the open sky on one of the three neighboring hills: the Hill of Repentance, the Hill of Love, or the Hill of Reason. Everyone is free to choose the priority area of their life, and hope and pray that their wish comes true.

thanks again Lastochka, one more nice post about an historic feature I didn´t know.

I keep visiting your blog, I just don't write as much comments as I should...

If you need your ex-girlfriend or ex-boyfriend to come crawling back to you on their knees (even if they're dating somebody else now) you have to watch this video
right away...

(VIDEO) Get your ex back with TEXT messages?