Dedicated to the memory of Bella Akhmadulina 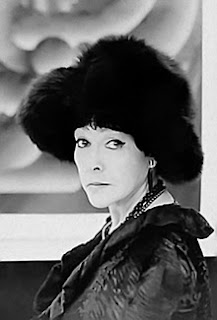 Known in Russia as "the voice of the epoch," Bella Akhmadulina is one of the century's foremost poets who came to prominence during the Soviet era.

She is a member of the Russian New Wave literary movement, a group of writers who embraced Western ideology during the 1960s.

During this period her colleagues Yevgeny Yevtushenko and Andrey Voznesensky experimented with innovative poetic styles focusing on current issues of the day. Akhmadulina relied on traditional language to capture the mood and sentiments of the time.

I went out to the garden - but in garden,
the word, lies lush luxuriance.
As gorgeous as a full blown rose,
it enriches sound and scent and glance.
The word is wider than what surrounds me:
inside it all is well and free;
its rich black soil makes sons and daughters
of orphaned and transplanted seeds.
Seeding of dark innovations,
O garden, word, you are gardener,
who to the clipper's gleam and clutter
increase and spread the fruits you bear…

The poet Joseph Brodsky considered Akhmadulina an heiress to the Lermontov-Pasternak line in Russian poetry and referred to her as the “treasure” of Russian poetry. Akhmadulina has been cited by him as the best living Russian language poet.

The main themes of Akhmadulina's works are friendship, love, and human relations.

Smiling nervously but brightly,
conscious of her youth and fame,
she set the way that she was asked to
indifferently - or playing games.
Under heaven's dome's eternal childhood
April nineteen hundred twelve
has promised her in Ospedaletti
only prosperity and sun
She looks out from a lacy nimbus,
her hands folded in her lap.
The shadow of her future torments
lies locked inside her photo's trap….

How do you make this, o my college-comrades?
Having waked up, while dark’s moving to light,
you take your pen and open your notes,
and write – and is this quite enough to write?

No, in my case, all’s worse and all’s another:
I’d spend a candle, look through a window’s pane
like a bad student, that hasn’t solved his puzzle…
and find that light’s moving to dark again.

First comes the night of vigilance and woe,
Then (will it come?) the undistinguished hum…
We’re to begin that when we’re born – not grown –
and today I have neither mood nor time.

Akhmadulina avoids writing poems on politics although she did take part in political events in her youth, supporting the movement of so-called ''dissidents''.

She gained great popularity in the early 1960s in public recitals of poetry before vast audiences at the Luzhniki Stadium, Moscow State University, the Polytechnic Museum and other venues. Akhmadulina appeared alongside Andrey Voznesensky, Yevgeny Yevtushenko, Bulat Okudzhava and Robert Rozhdestvensky – all poets, worshipped by millions, who played an important role in the liberation of the collective consciousness after decades of repressions.

Bella Akhmadulina was a mild, peaceful and at times ingratiating figure in opposition to the Soviet establishment, of which these people were a necessary complement. She was thus among the “podpisanty” (“signers”), people who signed letters to the authorities in support of individuals who showed themselves to be more open and aggressive opponents of the communist regime, like Andrey Sakharov, Lev Kopelev, Georgy Vladimov, or Vladimir Voinovich. Her statements were published in The New York Times and broadcast on Radio Liberty and Voice of America.

Akhmadulina was sometimes compared with Anna Akhmatova for her sincere feminine style. But later, after Nikita Khrushchev was dismissed by Leonid Brezhnev, the "thaw" ended and her style was misjudged by Soviet critics as eroticism. Akhmadulina was barred from the Writer's Union and banned from publication at the same time as Aleksander Solzhenitsyn and other Soviet dissidents. Her book of poetry "Oznob" (“Fever,” 1968) was published in Frankfurt, Germany, and in the US under the title "Fever and Other Poems" (1969).

When she was banned from the Soviet press and media, Akhmadulina delivered her statements through the foreign press and radio. Her poetry has been translated into English, Japanese, Italian, Arabic, French, German, Polish, Czech, Danish, Armenian, Georgian, Latvian, Kurdish, Romanian and many other languages worldwide.

Akhmadulina also devoted herself to writing numerous essays about Russian poets and translated poetry from France, Italy, Chechnya, Poland, Hungary, Bulgaria, Georgia, Armenia, among other countries, into Russian. In 1984 Bella was honored with the Order of "Friendship of Peoples".

The family was well positioned in the Soviet hierarchy; her father was a highly placed customs official and her mother a major in the KGB.

Akhmadulina attended the A. M. Gorky Institute of World Literature in the mid-1950s. During her studies at the institute she published poems and articles in different newspapers, both official and handwritten. Her first poems were published in 1955 in the official Soviet magazine "October".

She married poet Yevgeny Yevtushenko in 1954. In 1960, she completed her education at the Gorky Institute, preceding an expulsion due to her overly apolitical verse. That same year, she divorced Yevtushenko and married short story writer Yury Navigin. In 1962 her first book of poems, “Struna” (“The String”) was published to resounding success. She divorced Navigin in 1968 and, in 1974, married artist Boris Messerer. She has served as secretary to the Soviet Union of Writers and is an honorary member of the American Academy of Arts and Letters.

Akhmadulina currently lives in Moscow with her husband Boris Messerer and her two daughters, Elizaveta and Anna.

Her first two collections, “Struna” and “Uroki muzyki” (1969; translated as “Music Lessons”), contain what many critics regard as her finest poems. A selection of these early works was translated into English in “Fever and Other New Poems” (1969). Two of Akhmadulina's best-known poems are “Oznob” (“Fever”) and “Skazka o dozhde” (“Fairytale about the Rain”).

There is again a change in Nature,
the green is very rough in sight,
and rises – in a lofty fashion –
the figure of the mushroom, white.

And this old garden itself shows
all living woods and skies above,
and choices of my grace are posed
just on three faces that I love.

The body of the moth, so sightless,
dies in the lamp’s indifferent light,
marks fingers with its golden brightness,
and gives hand the non-pleasance, slight.

Oh, Lord, how in this best of summers,
my soul’s peace is long and great –
thus in a rainbow its colors
forbid one more to be inset.

“Struna” was criticized by the then-Soviet government for being too personal and emotional and caused Akhmadulina problems in publishing later poems. Critics have compared Akhmadulina's poetry to that of Acmeist poets Anna Akhmatova and Tsvetaeva, and have noted her acknowledged literary debt to her predecessors Pushkin and Mikhail Lermontov.

Although relatively little has been written in English or Russian about her work, critics are in general agreement in their high regard for Akhmadulina's stylistic and thematic variety. Scholars have praised Akhmadulina's distinctive poetic voice, lively style, and original use of themes.

They also commend her witty use of metaphor to comment on society and the natural world, and her ability to create and sustain her personal perspective in her poems.

(from "A cruel romance")

And I shall tell you at the end:
farewell, don’t pledge self to love, helpless.
I go mad, or just ascend
to the high echelon of madness.

Hell of a blunder! I shall not
Forgive you else. It lives – my body –
it roams, sees the real world,
but just with emptiness it’s loaded.

My mind yet makes its scanty work,
But arms had helplessly felled down,
and, likewise a small airy flock,
vanish aslant all smells and sounds.

Ярлыки: Dedicated to the memory of Bella Akhmadulina