Gudok is an ancient Russian folk music instrument. In spite of its name (meaning “hooter” in Russian) it is a string instrument. Skomorokhi (wandering minstrel-cum-clowns) used it in a combination with the Gusli. Gudok consisted of an oval or pear-shaped dugout wooden case, a flat sounding board with resonator holes, and a short fingerboard without frets, with a straight or unbent head. The instrument could be 30 to 80 cm long. It had three strings posited at one level to the sounding board. When playing the bow touched all the three strings simultaneously. The melody was played on the first string, and the second and the third ones sounded without pitch variations. Continuous sounding of the bottom strings was one of the prominent features of Russian folk music. During the performance the instrument was held on a player’s knee in the vertical position. Has been extended later, in XVII-XIX centuries.

Gudok reminds of a number of string instruments of the world. These are Bulgarian Gadulka and Southern Slavic Gusle and Liritsa, as well as West European Rebek and the Greek stringed lyre. There are also various Middle Asian instruments, less similar in the shape of the case. One of the Middle Asian names of such a stringed instrument – gidjak also reminds of the Russian Gudok.

All these instruments are placed vertically on a knee and play with the bow on three (most often) strings. The tune is played only on the highest string. There are only four “playing” fingers, though the little finger is often not used. Taking into account the open string there are only five (or four) sounds, just like in early Gusli. The remaining two strings "hooted" similar to the well-known Scottish bagpipes. 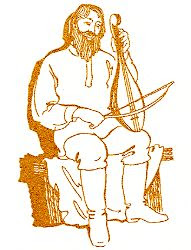 Gudok can be referred to professionally made, but musically simplified instruments. Though many folk masters who knew joiner's craft, could make such an instrument independently.

European instruments differed from their Eastern analogs by having a wooden upper sounding board instead of a leather membrane or an animal’s bladder, like the latter ones. So European versions with richer and more powerful sounding can be considered more progressive.

Most likely, metamorphoses with a pro-Gudok occurred in Greece and from there got spread across the Eastern Europe, including Russia. However, Russian Gudok had its own peculiar features. Its case was of a pointed boat-like shape instead of a pear-like shape.

It is remarkable that Gudok was recorded in archeological excavation of Veliky Novgorod earlier than Gusli. By the way, in the Astrakhan Province a reed pipe and svirel were also called Gudok.

Gudok was often used in small ensembles both with other instruments and with their relatives. There was a whole family: Gudok, Gudochek and Gudische.

Gudok was very popular in Russia at all times. It managed to survive even persecutions of secular music in the 17th century, under Tsar Alexei Mikhailovich. But it could not withstand the attack of the western music in the 19th century and disappeared from Russian culture, without having lived to its millennium. Gudok was partly replaced by the violin.