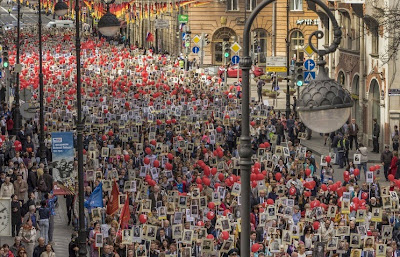 TOMSK, May 9. /TASS/. Up to one million people worldwide will take part in the so-called "Immortal Regiment’ marches, during which ordinary people carry photographs of their relatives who took part in the Great Patriotic War (a term used in Russia and other former Soviet republics to describe hostilities on the eastern fronts of World War II in 1941-1945).
The Immortal Regiment action was first held in the Siberian city of Tomsk in 2012. In 2013, it was already held in 120 cities with Kazakhstan and Ukrainian joining the event, which gathered a total of about 200,000 people.
Last year the Immortal Regiment was joined by Israel, Kyrgyzstan and Belarus. This year the event already took place in the United States and is expected to be held several cities of Norway, the German capital of Berlin, Dublin, Beirut, Vienna and other cities.
At least 150,000 people are expected to take part in the march of the Immortal Regiment in the Russian capital of Moscow after President Vladimir Putin permitted them to march down the central Tverskaya Street and Red Square after the annual Victory Day Parade.
The anniversary parade in Moscow on May 9 will be one of the most massive events in the history of celebrations.
The parade will showcase 16,000 military servicemen marching, 194 units of military hardware and 143 combat aircraft.
A historic reconstruction is also planned for the parade. Some people will be dressed in uniforms of the times of the Great Patriotic War - infantrymen, sailors, pilots, sappers, cavalrymen and Cossacks.
Military units from Azerbaijan, Armenia, Belarus, Kazakhstan, Kyrgyzstan, Tajikistan, India, Mongolia, Serbia, China will participate in the parade.
Around 2,300 people have been invited to the Red Square for celebrations, including veterans from Russia and abroad.
According to official data, about 27 million Soviet citizens, including both civilians and servicemen, died in the Great Patriotic War against Nazi Germany in 1941-1945.
Source: http://tass.ru/en/russia/793840
Автор: lastochka на 14:29

Hello Everybody,
My name is Mrs Sharon Sim. I live in Singapore and i am a happy woman today? and i told my self that any lender that rescue my family from our poor situation, i will refer any person that is looking for loan to him, he gave me happiness to me and my family, i was in need of a loan of S$250,000.00 to start my life all over as i am a single mother with 3 kids I met this honest and GOD fearing man loan lender that help me with a loan of S$250,000.00 SG. Dollar, he is a GOD fearing man, if you are in need of loan and you will pay back the loan please contact him tell him that is Mrs Sharon, that refer you to him. contact Dr Purva Pius,via email:(urgentloan22@gmail.com) Thank you.

Did you realize there's a 12 word phrase you can tell your partner... that will induce deep emotions of love and instinctual appeal for you deep within his heart?

Because hidden in these 12 words is a "secret signal" that triggers a man's impulse to love, idolize and look after you with his entire heart...

This impulse is so built-in to a man's genetics that it will make him try harder than before to love and admire you.

Matter-of-fact, fueling this influential impulse is so important to having the best ever relationship with your man that once you send your man one of the "Secret Signals"...

...You will instantly find him expose his heart and mind to you in such a way he never expressed before and he will perceive you as the one and only woman in the world who has ever truly interested him.

I now own a business of my own with the help of Elegantloanfirm with a loan of $900,000.00 USD. at 2% rate charges, at first i taught with was all a joke until my loan request was  process under five working days and my requested funds was transfer to me. am now a proud owner of a large business with 15 staffs working under me. All thanks to the loan officer Russ Harry he is a God sent, you can contact them to improve your business on.. email-- Elegantloanfirm@hotmail.com.