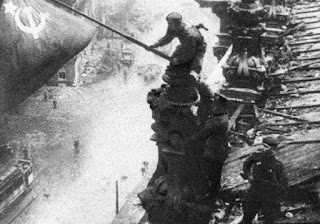 On June 22nd 1941 Nazi Germany launched a perfidious offensive against the Soviet Union without any declaration of war. What followed was the bloodiest war in the history of humanity which claimed millions of lives and inflicted untold suffering. The sad date is marked annually on former Soviet space, particularly Russia, Ukraine and Belarus, which bore the brunt of the attack.

Many accounts of the war and pre-war period reveal misrepresentation and outright falsification of facts. 68 years on, historians continue to ponder on whether the Soviet Union was ready for the war and why the Nazis managed to wedge that deep into the Soviet territory. Russian historian Vladimir Nevezhin says one of the sore points in disputes about the war is relations between the Soviet Union and Germany.

Some tend to claim that the Soviet Union was an ally to Nazi Germany, he says. But there was no way it could be Germany’s ally as the Soviet leadership regarded Germany enemy number one since 1940, when it got down to elaborate strategic plans in preparation for the war. All ideological structures were alerted to pursue the sole purpose of getting ready for the war. Another disputable point is how prepared the Soviet Union was for the war and the extent of miscalculations on the part of military command in waging it. But even though there could be errors or even crimes, they should be viewed from a broader context, as besides top leadership there were district commanders and army commanders and they too bore responsibility for what happened in 1941.

Amassed on the Soviet front by the time of the attack were 190 divisions of Germany and its allies, including elite tank divisions with 3500 tanks. Nearly all forces on the ground were aimed against the Soviet Union. The Soviet-German front became decisive in the Second World War, and Hitler and his entourage, who counted on a swift victory under the Blitzkrieg doctrine, were building plans for the future. By autumn 1941 the Nazi heads were planning to advance on Iran, Iraq, Egypt and the Suez Canal. But the plans fell through due to the unparalleled heroism of Soviet soldiers and officers who mounted fierce resistance over a territory from the Baltic to the Black Sea. A glaring instance of such heroism was the defense of Brest Fortress in Belarus which lasted for more than a month.

From the very outset the war followed a scenario different from the one pursued by Nazi generals. Despite the mistakes the Red Army crushed Nazi plans as early as in summer 1941 and changed the course of war in line with its own scenario.

Well, of course the Cold War led to a rather interesting "rewriting" of history on both sides of the "iron curtain".

I recently had a discussion with a friend who was telling me about her daughter's final history paper in high school. Of course it was about the cold war, and of course, her daughter having been born after the cold war was over, had a very different take on those decades than the one my generation was given as history. And of course we saw a radical change in the history of western/ Soviet relations, after WWII was over, as compare to before it occured.

Many Americans who were raised on the concept of the Soviets being western allies DURING WWII were suddenly subject to the trials of the McCarthy era for having been members of organizations that they were actually encouraged to be members in at the time. This rewriting of history had catastrophic effects on the careers and lives of many, on both sides, as history was altered to suit the new political worlds.

If you need your ex-girlfriend or ex-boyfriend to come crawling back to you on their knees (even if they're dating somebody else now) you got to watch this video
right away...

(VIDEO) Have your ex CRAWLING back to you...?