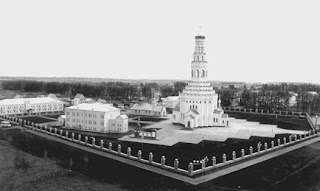 The former battlefield near Prokhorovka is now a park with St.Peter and Paul’s Church and a memorial bell-tower that peals every 25 minutes in honour of Russian valiance in the three major battles in the history of Russia – the Battle of Kulikovo, the Battle of Borodino and the Battle of Prokhorovka.

This war is all but forgotten in America. It is strange, but most of the wars that we have taken part in have been forgotten. I suppose because almost none have occured within our own borders, there is little celebration of victory and the days set aside to honor those who died in them tend to be days when stores run special sales that they advertise weeks in advance. An unusual way to honor your nation's war dead.

When I was a child that was not the case. On these days, every business closed down, and every family would go to the graves of some member of the family who died in those wars.

I used to sit and talk to very old men who would gather in the parks by the war memorials who had fought in the previous war, World War I, and listen to them tell stories about their time on the front and in the trenches. I wasnt so much interested in the war itself but in the individual stories these old fellows would tell. I doubt there are many people still alive who fought in the first world war, and those who fought in the second are rapidly going as well.

I simply find the differences in the way our two countries give memory to the second great war interesting.

I think that the difference in mentuality between russians and americans also plays a big role.
Geographically America's land defended by the waters of two big oceans.
Historically a lot of invaders on their way to West or to East needed to cross our territory or planed to occupy it. We need to be ready to defend ourselves we could find allies only for some time. So we could count only on ourselves.

Yes, it was difficult for Americans to understand the entire idea of the Eastern Bloc and the spheres of influence that came in the negotiations that ended World War II, primarily because Americans never learned how often Russia was invaded from the nations to the West of it, by the Teutonic Knights, Lithuania (as it was in the late middle ages, a very significant power), from Poland, from Prussia, and later by Sweden. Even from France, when Napoleon was bent on a world, or at least continental empire.

While during the Cold War, Americans asserted that the Soviets sought to dominate the world, the Soviet Union rarely attempted to extend itsele beyond the borders that were agreed on at the end of World War II.

One of the reasons that in South Africa, many of the anti apartheid groups looked to the Soviet Union for aid in their struggles against the Afrikaaner government, was that they said that at least the Soviets will leave if you ask them to, or if you have to pressure them to leave, they will as well. Steven Biko is reported to have said this in one of his interviews back in the 1970's. He said that America and Europeans, once they got into a nation or region were far less inclined to leave it when asked.

If you need your ex-girlfriend or ex-boyfriend to come crawling back to you on their knees (no matter why you broke up) you gotta watch this video
right away...

(VIDEO) Win your ex back with TEXT messages?