In memory of Yekaterina Maksimova 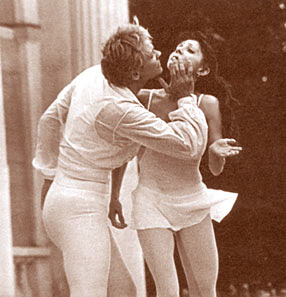 She used to say she had never been afflicted with star disease. She had never felt everything was hers for the asking. But her position at Moscow’s Bolshoi Theater, her rare gift for dancing and teaching dancing, her gift for stage-acting, and, last but not least, her charm seem to have really fallen in her lap.

If anyone could have danced all night, it was Maksimova. She starred in performances of classical and modern repertory and screen versions of ballets. She was offered jobs by choreographers and film directors of international recognition — Yuri Grigorovich, Maurice Bejart, and Franco Zefirelli. Her schedule was full to the brim. She said, in one of her last interviews, that there’d been so many times that she felt dog-tired and worn out. And she would be waiting behind stage thinking, if there was anything she could not do, it was going out into the limelight.

But as the music starts playing and you come on the stage, exhaustion gives way to concentration on your performance, Maximova says.

In the past 50 years, the press has repeatedly heaped praise on Maximova’s outstanding performances, calling her ballet icon Ulanova’s successor and a pink of graciousness. Her legendary partner and husband Vladimir Vasilyev also made the headlines with the press describing the duo as the most beautiful couple of Russian ballet and the world’s best ballet dancers.

Remarkably, Yekaterina Maximova often pointed to Chekhov’s Anyuta as one of her favorite main parts in a ballet that she stressed helped her stick to major moral values. In particular, I realized once again that I must always stand by my own principles, Maximova explained. And she tried to adhere to this till the end of her time, our correspondent concludes.

Ярлыки: In memory of Yekaterina Maksimova

The Lasting Tribute website has updated its memorial pages to include Ekaterina Maximova.

It's a respectful memorial to her and somewhere to pay tribute to her family's fortitude at this difficult time.

EVERY comment is monitored so that nothing offensive or inappropriate is published.