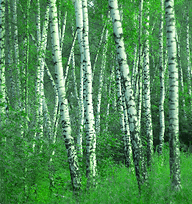 The emblem of middle region forests of Russia is white-trunk birch. White-trunk birch became a symbol of spring, light and love to the fatherland. The word “birch” is very ancient and is connected with the verb “to keep, to take care”, since the Slavs considered the birch as the protecting people gift of God. The year began with spring and people celebrated it not with fir, but with the birch.

The birch was necessary planted near the houses, people tried to surround the village by “protecting” belt of birches, as they believed that “birch spirit” can guard against cholera and another diseases. The birch was planted near the gate, there was a bank and people could speak with a tree and ask it to give them might and strength. Birch forest is light and clean and is always full of birds, berries and mushrooms.

It is really hard to imagine the Russian sauna without the birch broom. Phytoncides out of leaves and buds sterilize the air. Especially successfully they cope with pathogens of typhoid fever, tuberculosis and diphtheria.

The birch was widely used in a peasants’ life, and first ways of Slavs’ written language was made on the birch bark and was preserved in the ground till now.

Birch sap is the sap extracted from a birch tree, such as a North American Sweet Birch or a Silver Birch. The sap is often a slightly sweet, thin syrupy-watery liquid. The tree sap contains sugars (namely xylitol), proteins, amino acids, and enzymes.

Birch sap must be collected during a specific time of the year, depending on the species and geography, at the break of winter and spring when the sap moves intensively, typically between the first thaws and the start of bud development. The collected sap can be drunk as a tonic and it is a traditional beverage in Russia.

Birch sap collection is done by tying a bottle to the tree, drilling a hole into its trunk and leading the sap to the bottle by a plastic tube. A small birch (trunk diameter about 15 cm) can produce up to 5 liters of sap per day, a larger tree (diameter 30 cm) up to 15 liters per day. Birch sap has to be collected in early Spring before any green leaves have appeared, as in late Spring it becomes bitter. The collection period is only about a month per year. 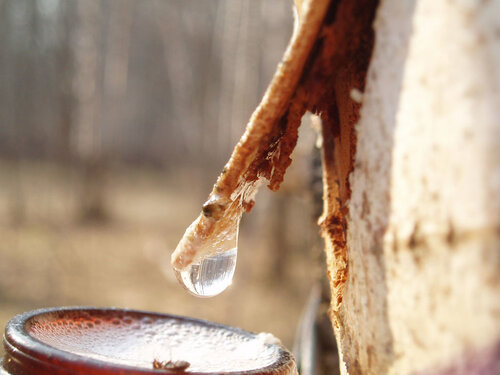 «Березовый сок» на Яндекс.Фотках
Birch sap may be consumed both fresh and naturally fermented. It is a very refreshing drink.

Birch sap can also be used as an ingredient in food or drinks, such as birch beer or wintergreen flavored candy. Concentrated birch sap is used to make birch syrup In Russia this tonic is used as a traditional herbal medicine functioning as antiseptic, anti-parasitic, anti-inflammatory, and anti-itching treatment.

Fresh birch sap is highly perishable; even if refrigerated, it is stable for only up to 2-5 days. Shelf life can be prolonged by freezing or pasteurization. However pasteurization destroys some ingredients and can alter the taste of the product. Frozen birch sap is fairly stable.

Also, they stored birch brooms, covered roofs with the birch bark, made boats, clothes, shoes out of this material; they braided boxes, punnets, in which honey, milk, berries and other products could be kept for a long time. Moreover the birch bark was added to the dough.

The healing properties of the birch are known from time immemorial. There are many pieces of advice in different herbals of the XVI – XVII centuries.

This tree gives everything to people for their health: juice, catkins, leaves, bark, new branches, tender thin roots, birch coal, tar. Also it has bioenergetic therapeutic effect. A man fells himself sprightly, calm and full of strengths of life in the birch forest.

Since olden days the birch bark considered as very important medicinal raw material, with the help of which people treated the diseases of joints, urinary and nervous systems. The Slavs sprinkled the wounds with the ground birch bark for its fast healing.

My grandmother had a cross made of birch wood that she kept on the front door of the apartment. To keep the devil out

This even reminds me that I have not seen birch trees in many years. They were common where I grew up, especially the white birch, but not so much where I now live.

Have you ever tried the birch sap?)
We have very beautifull white birch near our house.I was admiring the picture of full moon hiding behind it's branches for some hours the last summer.It's a pity that I'm not a good photographer otherwise I could place it here.))

I never tried birch sap, though it is available in the United States, but usually only over the Internet, from web sites selling health foods, or traditional medicines.

I have had birch beer, which is a nonalcoholic beverage that was very common in the United States for a long time, but not as easy to find these days.

My gusli is made of a very high quality birch wood. Sometimes I put it close to my face and breath deeply. I have always liked the smell of wood since childhood, because my father was a carpenter, and the smells of wood bring back very early memories of his workshop.

My grandfather also worked with wood as a cooper, a maker or repairer of barrels. He could repair a broken wine barrel without losing a drop of wine.