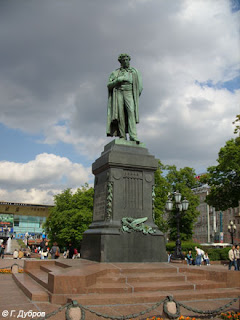 On a busy square in the center of Moscow, placed on a high pedestal stands a bronze statue of the great Russian poet Alexander Pushkin. This is one of the most beautiful and admired monuments in the city. But few people, however, know about its creator, the talented sculptor Alexander Opekushin.

Not far from the city of Yaroslavl on the Volga there is a small village called Svechkino. In the 1840-ies it was owned by a landlady. The soil there was not very fertile, and the harvest cropped was barely enough to last until January. To support their families peasants went in for all kinds of crafts, among which stone-cutting and moulding prevailed. One of the most gifted and successful moulders was Mikhail Opekushin. His clay figurines of shepherds and shepherdesses always sold well, yielding a small but stable income. In 1838 he became a father. When still a boy, his son Alexander showed keen interest in moulding and sat for hours on end watching his father work. Seeing that his son had a real gift for moulding, the father persuaded the landlady to send him to St.Petersburg to study.

At the age of 12 Alexander left his small village for a big city. He studied first at the drawing school, than in the studio of the well-known sculptor David Yensen. Once he secretly brought with him the statuette of a boy blowing soap bubbles. He wanted to stay up after work and polish it without telling anything to the master. But the master saw the statuette and was deeply impressed by it. A professor of the Academy of Arts, David Yensen obtained permission for his pupil to attend classes there.

Alexander worked hard, carving his way in art with his hammer and chisel. But he remained a serf peasant, a dependent man who could any moment be torn away from his favourite job.

To save money to buy freedom Alexander Opekushin worked himself to the point of exhaustion. Finally, he did receive a letter of enfranchisement bought at the cost of enormous effort. Only two years later, in 1861, Tsar Alexander II issued a Manifesto abolishing serfdom in Russia.

Years of perseverant study were crowned with success. Alexander Opekushin received a silver medal for a bas-relief on a classical theme. The young sculptor was invited to take part in the creation of a huge monument in Nizhny Novgorod.

The lower part of the monument consisted of figures of distinguished military commanders, scientists and politicians. Opekushin was entrusted to make the figure of Tsar Peter the Great. He did it so well that immediately received two orders – one for the statue of Empress Catherine II, the other for the statue of Admiral Alexei Greig. This work brought to him huge popularity in Russia. But it was the bronze statue of Alexander Pushkin that won him international acclaim.

In 1871 Tsar Alexander II decided to pay tribute to the great poet by putting up his statue in the center of Moscow. A commission was set up to choose the best model. The demands were very strict.

Alexander Opekushin was very much excited about the project. He went through all of Pushkin’s works and memoirs by his contemporaries and carefully studied the portraits and the death-mask of the poet. He made two models. Both were displayed at a special exhibition along with 13 other works. The commission came to the conclusion that only two sculptors may be entrusted with this order – Opekushin and Zabello. After some hesitation preference was given to Alexander Opekushin.

The sculptor made the monument to Pushkin with his head slightly bent, as if consumed with thought, his face bearing the sad and enigmatic expression. The deep folds of his overcoat accentuate the outline of the figure. The statue is both simple and exquisite, conveying the spiritual side of the poet.

The monument was unveiled on June 6, 1880. When the cloth was torn down, a cry of admiration ripped through the air. The author stood beside his work beaming with happiness…

Many decades have passed, but the bronze statue made by Alexander Opekushin still remains the best monument to Alexander Pushkin ever created by a sculptor.