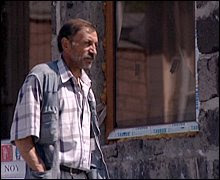 Tens of thousands of Armenians living in Georgia's Javakh province say their economic problems are being ignored by the country’s government. They warn that bringing about change could be difficult, as many have stopped speaking out, fearing recrimination.

100,000 Armenians are living in the southern Georgian province, where jobs are scarce and poverty rates are high.

“Most Armenians living there do not speak Georgian. They are Georgian citizens, they live on the Georgian territory. This is the first obstacle to integration in Georgia,” explains Suren Manukyan from the Museum of the Armenian Genocide in the Armenian capital Yerevan.

But during Soviet times and in the years that followed, the problem of language did not exist. Many people worked at the Russian military base on the outskirts of town.

The money they earned there fed their families. But when the Russians left a few years ago, their salaries went with them and the region became one of the poorest in Georgia.

The economic problems of the Armenians in Georgia are not exactly the highest priority of the government right now. The authorities continue to pump money into showcase projects, such as a presidential palace in Tbilisi.

Because of the fear of prosecution, many Armenians in Javakh are afraid to speak their minds. Those brave enough to raise their voices in the past have felt the strong arm of the law.

Dr Sergey Minasyan from the Yerevan-based Caucasus Institute explains why.

“There were some young people who decided to fight against the situation. They didn’t have enough political experience and money, but as young people they had enough spirit and guts to resist,” he says.

“Because they were so young and inexperienced, their activities finished how they finished: most of them have been arrested. This is why the political structure of this movement has been completely destroyed”.

Jailing people is only adding to local feelings of resentment and concerns for the future.

Dr Minasyan is not optimistic about the future of these people. He believes there is no strong interest in the political powers of Georgia to deal with this problem. “So their situation will probably remain the same for a long time,” he said.

But for the Armenians in Javakh time is running out. They say they are fed up with being ignored and just want the president to listen to what they've got to say.