A tale of terror and tragedy 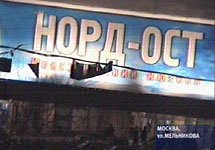 A tale of terror and tragedy

Terrorism is a word perpetually on the lips of politicians, journalists and the public. In spite of this endless attention to it, the real experience of terrorism, the terror itself, is hard to comprehend – such agony of fear, pain and confusion is far beyond the experience of the vast majority of people. After six years, the terror of the incident at the Moscow theatre has not disappeared. This is one attempt to describe what happened. 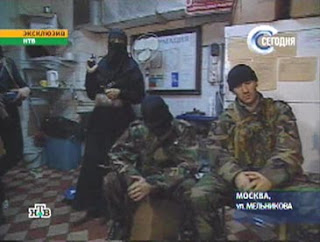 Around 900 people attended the performance of Nord-Ost on Wednesday, October 23, 2002. Their activity was ordinary enough. The play, an award-winning, Broadway-style treatment of a bestselling Soviet adventure novel, had been drawing sellout crowds to the grim industrial neighbourhood of Dubrovka, southeast of the city center, for just over a year. As the second act began, terrorists, armed with pistols, automatic weapons and explosives, entered the theatre, shooting up the lobby. The audience became aware of their presence when a single gunman burst onstage, fired his automatic rifle into the air and ordered the actors to the sidelines. He was followed by a small group who directed the sealing off of the theatre. Unless Russian forces ceased military operations and pulled out of Chechnya within one week, it was announced, the hostages would die.

The audience, actors and theatre staff were the hostages of Movsar Baraev, the 22-year-old leader of the Chechen Special Purpose Islamic Regiment and nephew of warlord Arbi Baraev. Movsar Baraev inherited the leadership of the SPIR when his uncle was killed the previous year in what may have been Chechen blood revenge, or an FSB operation. Russian authorities had declared Mosvar Baraev dead, for the second time, less than two weeks before the attack. Among the 41 terrorists accompanying Baraev were 19 black-clad and veiled women, who were charged with managing the hostages. They wore explosives wrapped around their waists. Later, it became known that most of them were widows and many of them were educated and from fairly prosperous backgrounds. One was the widow of Arbi Baraev. Some of the others were a university student, an actress, pharmacist, accountant and school teacher. They frequently cried. Some of their explosives may have been dummies, if an anonymous letter sent to one Russian newspaper is to be believed.

The hostages were forced to remain in their seats at all times and to use the orchestra pit as a toilet. A large bomb was placed in the ninth row of the auditorium.

There was no reasonable expectation on anyone’s part that the terrorists’ demands could or would be met. “We have come here to die,” the terrorists admitted freely. They released over 150 children, Muslims and pregnant women. They promised to release the 75 foreigners from 14 countries as well, but did not, as Russians reportedly objected. There were several Chechen hostages.

Six hours into the ordeal, at 3:30 a.m., a young woman, a store clerk who lived in the neighbourhood, passed through the police cordon and entered the theatre, where she shoved Baraev and urged the hostages to revolt. “What are you afraid of? He’s a clown,” she is reported to have said. She was forced through a side door of the auditorium and shot.

The hostages were allowed to keep and use their mobile telephones. One terrorist filmed their activities. It was part of their campaign for attention, which went into high gear the following day. State Duma member from Chechnya Aslambek Aslakhanov, liberal politicians Irina Khakamada, Boris Nemtsov and Grigory Yavlinsky, Chechen former chairman of the Supreme Council Ruslan Khasbulatov and entertainer-legislator Iosif Kobzon were involved in negotiations with the terrorists.

Two doctors were allowed into the theatre as well. Late that evening, a reporter from the British newspaper The Sunday Times called Baraev on his mobile telephone and was the first of several journalists and news teams to receive permission to enter the theatre. Baraev told the English reporter that they were not terrorists, but had simply come to get the Russians out of Chechnya. With him were a masked deputy and the single non-Chechen in the group, identified by the press as a “Gulf Arab,” who closed out the interview by stating in good Russian (he spoke Russian considerably better than Baraev) that the group wanted to die much more than their enemies wanted to live.

The terrorists requested that journalist Anna Politkovskaya act as mediator. She rushed back from the United States, arriving on Friday. Other journalists, former prime minister Evgeny Primakov, former president of Ingushetia Ruslan Aushev and Aslakhanov also took part in the second round of negotiations. At the same time, the FSB’s Alpha team rehearsed an assault at another theatre in Moscow. More doctors were allowed in and 19 hostages were released that day. It was reported that evening that the terrorists would begin killing hostages at midnight. The hostages heard those reports on the radio. Gen. Viktor Kazantsev, presidential envoy to the Russian Southern Federal District, called one of Baraev’s deputies and promised to fly to Moscow to meet with the terrorists the next morning. The hostages had a reprieve.

Half an hour later, a man entered the theatre saying he had come for his eight-year-old son. His son was not found among the hostages and he too was taken out and shot. Then a hostage panicked and made a dash for the big bomb. A gunman fired, but missed him, hitting two other hostages, one of whom was wounded, while the other was killed. An ambulance was called for them. That night, a Chechen may have fired off several rounds inside the theatre, saying the silence was having a bad effect on him. According to other reports, the shooting was a response to a false story planted in the press that the FSB was planning a raid on the theatre at that time. The purpose of that ploy, those reports say, was to lull the terrorists into a false sense of security after warding off the non-attack.

Gen. Kazantsev’s call had been a trick. At 5:30 a.m. on Saturday, hostages recounted, a gray mist with a sharp scent began to settle on the (mostly) sleeping group, causing a feeling of intoxication. The Chechen men shot out the windows in the theatre and some reportedly fled. They shot randomly on the street, but the Russian forces took no action, conscious of the fact that a single “black widow” in the theatre could put a catastrophic end to all their efforts. Soon the gas (it may have been an aerosol in reality) took effect. Twenty minutes after it was launched, however, a hostage staggered out of the building, causing concern over the number of people still conscious inside. That hostage was followed by four others. Their ordeal had lasted just over 56 hours.

Then the special forces moved in. Baraev and his closest deputies had not fled or lost consciousness. They were killed in a storeroom in a shootout. Other Chechen gunmen held out for half an hour. Then Russian soldiers killed the unconscious black widows. By some reports, all the terrorists were killed, although not all of them have ever been accounted for. It is known for sure that 33 of the terrorists were killed. The BBC reported at one time that some terrorists were arrested at the scene. Anna Politkovskaya claimed to have met with one of the surviving terrorists in 2003. There were no losses to the Russian side, although there were several cases of poisoning from the gas used.

Initial accounts of the operation from official sources were misleading and contradictory. For several hours, it was maintained that no hostages had been killed. Then some deaths were acknowledged and blamed on the Chechens. It took two days for the real story to emerge. The spectacular triumph over the forces of terror had been marred by a tragic tactical error: the lack of medical aid for the hostages.
Soldiers rushing to empty the explosives-filled building left unconscious hostages face-up on the ground around the theatre, causing many of them to choke to death. There are claims that the antidote to the drug used was available at the scene, but there were too few medics to administer it. The medics had not been made aware of the plans and were prepared to treat gunshot and explosion casualties. There were few ambulances available. Finally, city buses were brought in for that purpose. Doctors at the hospitals the hostages were taken to were not informed of the nature of the drug used on them. Altogether, 129 hostages died, including ten foreigners and 17 cast members, two of whom were children; 114 of them died at the theatre. 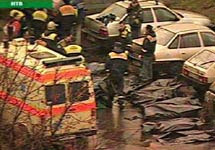 On the following Monday, 646 of the former hostages remained hospitalised. Chaos reigned among their family members. They were not informed of their relatives’ whereabouts. A hotline for them was never answered. Once they found their relatives, they were not allowed to see them for a long time. Another 69 hostages were allegedly denied adequate treatment.

Like all terrorist crises, this one left an aftermath not only of grief, but of suspicion and recrimination. There are many details that have never been elucidated and a number of obvious unanswered questions left from the tragedy. The official inquiry into the act continued until June 2007. In the Moscow Prosecutor’s Office’s report, five deaths were blamed directly on the actions of the terrorists, and 125 deaths were acknowledged to have taken place in the course of the operation against the terrorists. The gas used was described as “of a nature that has not been established by the inquiry.” Nonetheless, the 125 deaths were attributed to “a combination of unfavourable circumstances,” and not the use of the gas. Russian officials all the way up to Vladimir Putin have insisted that the gas used in the theatre was safe for the hostages. Its exact identity remains a state secret to this day, but it is commonly thought to have been a compound containing fentanyl, an artificial opioid.

Ярлыки: A tale of terror and tragedy