Russian samovar - a vessel for heating of water 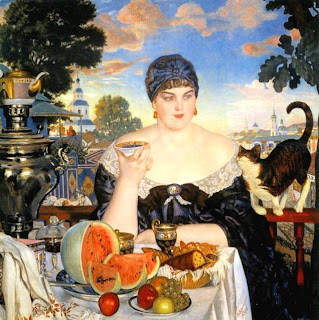 "Samovar - a vessel for heating of water for tea, mainly made of copper with a chimney and internal fire-pan" - one can meet such definition already in 1860th in the Explanatory dictionary of Russian language by V.I.Dal'.

Functional utilization of samovar is indicated in the dictionary - to heat water, but for the Russian way of life samovar meant much more, than just a simple water heating device. For Russians samovar was a symbol of home, comfort, friendly communication. Over the XIX - XX centuries a samovar became characteristic feature of Russian way of life, central article of tea-drinking which already in XIX century in Russia began to be perceived as a part of national cultural tradition.

Today it is difficult to say, when and where the first samovar was invented. It was found in the archives that already at the beginning of 1730th among the assortment of the copper tableware in the Urals one could find "cauldrons with chimneys", "distillery cubes with chimneys", " wine cubes with hubcaps and chimneys"", which were widely used in the monasteries and estates.

A copper tea-pot became the prototype of samovar with a chimney and a grill in which street venders prepared Russian national drink called "sbyten'", brewed from honey, herbs and dried berries. According to the drink this device received the name of "sbytennyk". 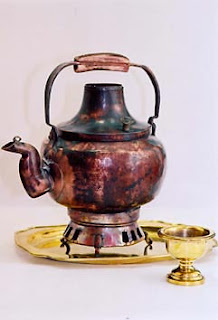 Due to the construction sbytennyk appeared to be extraordinarily effective, comfortable and economical machine for boiling water which stimulated his introduction in everyday home life of all layers of Russian society.

In 1760th the production of copper tableware and samovars was already introduced at large manufactories of the Urals and in Moscow. Along with samovar-tea-pots 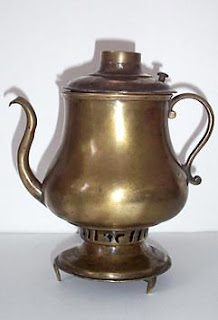 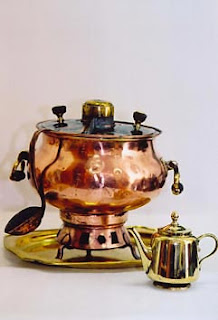 the samovars-kitchens were manufactured in a form of deep bowls on legs with a chmney in the center. The distinctive sign of those were the internal partitions, allowing not only to boil water but also to prepare different food. Sometimes the section intended for boiling water also had a faucet. The cooked food was served from the "kitchen" by special bailers. From above samovar-kitchen was closed by common lid, but quite often every section, in addition, had separate lid. Samovar-kitchens were used at not only at home, people took them along while traveling, when picnicking in the forest or in the field they cooked dinner in them and boiled water for tea-drinking.

The first known samovar factory was founded in the city of Tula by Nazar Lisitsin in 1778. 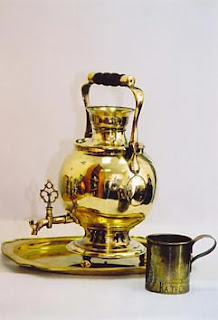 This town of gunsmiths became familiar to all the world as the center of samovar production due to the rich ore deposits, highly qualified craftsmen who worked metals in the area of Tula close to Moscow.

Even at the end of the XIX C when most of samovar manufacturing was concentrated on steam powered samovar factories in Tula and most of the manufacturing processes were mechanized the price of an ordinary plain samovar was around 5 rubles, which was equal to the monthly salary of a highly skilled worker, for the same amount one could also purchase a cow.

By the end XVIII C a samovar already had all those structural and functional features necessary for heating of water which allows to consider samovar as specifically national product. This and presence of the chimney and grill, soldered inside the body of samovar, ash-box, faucet, handles with holders, the crown, lid and the hubcap.

Most of the time samovars were manufactured in small workshops where only a few craftsmen worked each of those performed one operation. Manufacturing of samovars required good skills and metal treatment experience, ability to make a beautiful, high-quality samovar. The name of the craftsman and the town where the workshop was situated was usually engraved on the lid of the samovar used as sign of good quality.

At the beginning XIX C demand of samovars was already so great that besides the existing centers - Urals, Tula, Moscow the new factories and workshops in other towns were created. Gold and silver smiths were also involved in production of samovars. This period was characterized not only by the surprising variety of forms but also by differentiation of samovars by their utilization. Along with ordinary samovars, 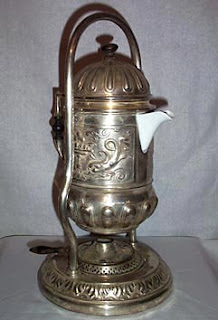 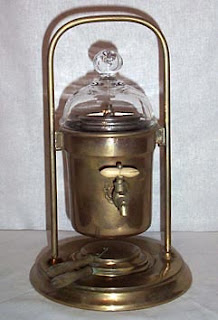 intended to support of certain temperature of the drink were produced.

Fashion changed, the forms of samovars, elements of their decoration, changed which allows pretty exactly to determine time when a samovar was made.

At the end of XIX C every Russian exhibition abroad dispayed samovars: the authors of reviews of the world artistic and industrial exhibitions always mentioned products of samovars factories. The factory which received medals at international exhibitions usually stamped image of medals on the lid, sometimes on the body of samovar mentioning the year of the award and quality of medal. The samovars of the famous factories such as steam factory of heirs of V.S. Batashev, factory of B.G.Teile up to ten medals were branded. Factories which received the status of supplier of the Russian emperior court or royal courts of Europe had the right to brand their samovars by the coat of arms of the proper court. The greatest number of factories was in Tula which became the acknowledged center of samovar production.

The improvement of samovar production technology the artistic level of samovar decoration in the second half of XIX age started to degrade. Forms and decoration of samovars became pretty standard. Unfortunately the widespread image of Russian samovar is linked with the late standard samples.

It is considered that samovar penetrated all layers of Russian society - from tsar's court to peasant's log cabin. Every home would have two samovars: one for every day use, other - for holidays and guests. Red-copper and brass samovars were polished to brilliance. Ash, clay was used for polishing of samovars which resulted in quick wearing of samovar walls. Due to the regular cleanings the inscriptions of producer, brand of samovar factories were worn away which explains no data about producer on many of the old samovars. Tradition of regular cleaning especially effected copper samovars - the soft metal was pretty quickly worn through, whereupon an old samovar was turned in for processing and the new one was bought. Therefore red, that that is copper samovars one can meet pretty seldom compared to red brass (tompak) and green copper (brass). Majority of the old samovars one can find were made from a more wear resistant copper alloys like brass, tampak, seldom from German silver.

In order to protect a copper or brass samovar from oxidization it was covered from inside by the thin layer of tin. Samovars from brass and red brass were often patinated from outside which gave them a beautiful greenish or brownish tint. In the second half of XIX C brass samovars and other metal ware was nickel-plated pritty often.

Most of the time charcoal, dry branches and sliver was used for heating of samovars. A dry pine cone dropped into chimney at the time when the water starts boiling would create a unique aroma in the house which signaled the family to give up businesses and enjoy tea-drinking.

The industrial progress at the end of XIX C the producers began to experiment with the construction of samovars and to apply the alternative sources of heating like kerosene and methylated spirit. In spite of seeming comfort and simplicity, such samovars did not receive wide penetration.

Except for the everyday and holiday samovars which were mass produced there was a piece production of the so-called salon samovars which were made by individual sketches a single copy or small series. Such samovars were made out of silver, as well as from German silver or copper which were silver plated a mercury or galvanic method or cladded by thin sheet of silver. They were richly decorated and were mainly used as interior decoration and not for preparation of tea. Salon samovars were mainly produced in Moscow, factory of K.Y.Pets, A.H.Matissen, in StPetersburg by F.N.Dubunin, in Warsaw by Pliewkewicz, Fraget.

Samovar often became a companion in the long trip. Traveller samovars are known for an unusual form. For the comfort of transportation they often designed as a box, trunk or rectangular box with cut corners. Less frequently they had a cylindrical or oval form and specific construction which was expressed in fastening of legs-supports and interpretation of handles. Legs were always removable. They were inserted in the special slots or were simply screwed on by bolts.

The process of samovar creation consisted of a number of operations which involved craftsmen of different specialty - from "navodyl'schyk" (body forger) and foundry hand to the joiner. Even if the craftsman worked in a little workshop alone and marked his products by his name he bought some parts (faucets, handles, "circles") as wholesale or ordered from other craftsman. On the samples of the first half of XIX C the same item sometimes might have two brands with the initials of different craftsmen, for example on the spigot of the faucet and on the lid. It confirms that the body was done by one craftsman and a faucet was casted by the other. On the faucets of samovars of the XIX C we often meet the stamped numbers: 0, 1, 2, etc. designating their size. One can notice that some specimens of the XIX C are made from different materials. For example, the body of the samovar is made from red copper and faucet - from brass. Similar materials if they are not meant to be used for decoration purposes can become the sign of restoration or alteration. So, pretty often, sbytennyks were modified to samovars, substituting the spout of tea-pot by a samovar faucet.

In creation of any samovar the leading role belonged to "navodyl'schyk" - the craftsman who forged the body of samovar. For forging of samovar they were using iron anvils. Depending on the use of the anvil its end could have different form - cone, ball, etc. If navodyl'schyk did a complicated form with bulges or verges, he had additional anvils. The body of the simplest form of samovar was forged in twelve steps. The first operation consisted of hammer together the indents connecting the stitch of the cylinder. Then it was carried to the smithy where the stitch was soldered in a furnace. Gradually the cylinder transformed into a vase or a ball or took shape of the beveled wineglass.

After the revolution of 1917 all samovar factories in Russia were nationalized, and re-oriented for the military production, production of samovars became waning, samovars lost in artistic decoration and variety. From the 50th production of coal samovars begins to yield the place to electric samovars, which were used mainly for decoration purposes. 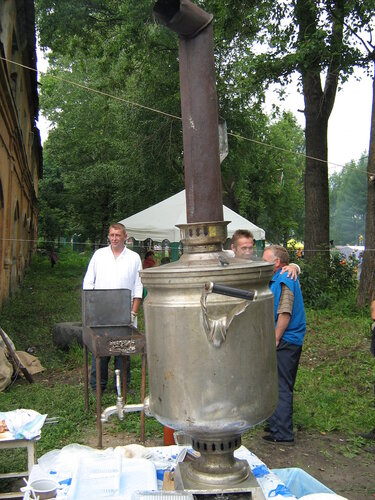 Ярлыки: Russian samovar - a vessel for heating of water

thank-you for such an informative article. very helpful.