Prime Minister Vladimir Putin traveled to Novosibirsk today to conduct a meeting on Russia’s transport system development strategy. The program, designed until 2030, will cost over 175 trillion rubles ($ 6.3 trillion), but the official was not frightened by the amount. Financial crisis will end in a year’s time, while roads take much longer to build, he believes 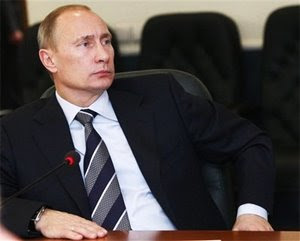 Putin, who arrived to Novosibirsk by plane from Krasnoyarsk, inspected the recently completed 4 km.-long road around the city that includes two large bridges. He criticized the quality of the asphalt, thanked the workers and said the new road would help improve Novosibirsk’s environment, as many transit cars that used to drive through the city will now be taken outside of it. “Economic development will speed up. Everywhere where new roads appear, it is developing”, Putin said.

He later repeated this statement when speaking to various officials whom he met at local university. The leader mentioned the federal transport development program and other national projects, such as preparations to the 2014 Games, that have an important “transport component”. “The current state of our transport system is far behind today’s needs of our economy, and furthermore, it deprives vast territories of development opportunities”, the PM stated. Thus, he said, Russia has no other option than large-scale i9mprovement of the transport system.

His speech was followed by a presentation by Igor Levitin, Russian Minister for Transport, who mentioned many esteems for the industry’s future until 2030, and completed his intervention by stating the 2030 development strategy will require an amount of $ 6.3 trillion. Levitin said 60 % of the sum would be covered from extra-budgetary resources, and asked Mr. Putin to approve the strategy. Unlike the rest of the meeting, the discussion that follow was not broadcast to journalists.

“We know about all these turbulence processes in world economy, Putin said in his final speech, but, according to all forecasts, they will only last for a few months or about a year, but we are considering a strategic plan that will work until 2030, and, with all the necessary corrections and changes to be made, we should treat this project and this work as one strategically important for Russia’s future. So, he summed up, the suggested transport development strategy is approved”.